Natural gas report week, October 28, 2021 brought more of the same as continued shifting price momentum threatened to leave market observers with whiplash.  Since the beginning of September, prompt month, 12-month and seasonal strips have consistently posted gains one week, only to retreat the next. Is it as simple as shoulder season weather fundamentals keeping the pendulum in motion, or is there something more at work?

Should we expect more of the same throughout winter or is it possible the answer is also just as difficult to pin down? Let’s take a look…

As far as the typical supply/demand fundamentals, things don’t look too bad this week. Here’s a quick snapshot of the basics: 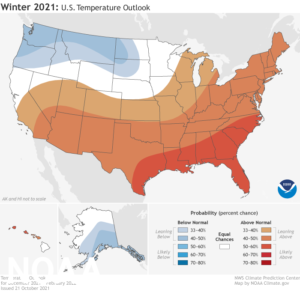 Clarity On The Horizon?

As the winter outlook becomes clearer, expectations for historically high winter natural gas prices seem more difficult to understand. This much is evident even in expert analysis. From sentiment that high prices will be limited to just this winter to projections for a recurring energy crisis, opinions have been as varied as recent winter strip prices. Rooted in the thought that international natural gas storage shortages will continue to drive overseas and domestic prices alike, the question seems to be, “For how long?” A CNBC report from this week tries to provide an answer. Some surveyed analysts expect high prices just through this winter while others paint a far more foreboding picture. (Is anyone really surprised?) Is it possible the answer is somewhere in the middle?

That seems to be the case as this week Russia solidified their commitment to delivering additional natural gas supply to ease near-empty European storage, reversing the recent historic price movement. “Dutch gas futures fell 8.9% to €79.10 ($92.35) a megawatt-hour on Thursday. The move put prices on track to fall by almost a fifth in October, an unseasonal decline and the biggest monthly drop since February. U.K. futures lost more than 11%. U.S. natural-gas prices fell, too, though less than the two European benchmarks.”

Nonetheless, skeptics remain…well…skeptical of whether or not Russia will actually deliver. Is the apprehension well-founded? We’ll see.

November moved off the board Wednesday, October 27th, settling the month at $6.202/Dth.