This week’s injection of 76 Bcf was in line with analysts’ expectations which ranged from 64-86 Bcf. With production and demand steady and temperatures moderating across the report week, the market gave up some of the prior week’s astronomical gains.

Nonetheless, the continued deficit to both last year’s numbers and the five-year average has prompted early-season preoccupation with end-of-season storage totals. With hints of above-average summer temperatures and low power generation stores of both coal and natural gas, should forecasts realize, it’s fair to acknowledge that we’ve not seen the last of natural gas price runs this summer.

Coal stocks, in fact, fell to 80 million tons in September 2021, a level not experienced since March 1978. The EIA explained, in addition to extremely low stores of coal, increased generation at coal plants further depleted stockpiles. “As U.S. coal plants have retired and remaining plants are used less, the country’s total coal stockpiles have declined. In addition, increased electricity generation by coal plants during the summer of 2021 also reduced coal inventories.”

The increased cost of coal made it a less profitable alternative to natural gas. Additionally, as coal plants have retired, coal-fired plants have been replaced by natural-gas fired plants.

As such, “…many U.S. mines have begun to close. Reduced production capacity and supply chain disruptions have created some concerns about the ability of coal-fired generators to replenish stockpiles to last through the winter. Electric grid operators are closely monitoring coal inventories this winter.” 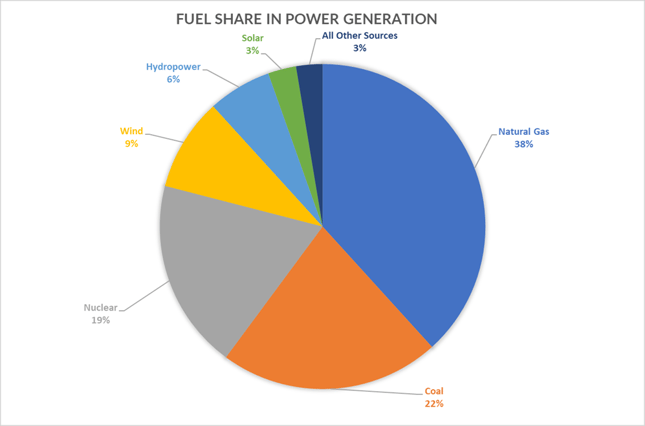 Given concerns about the ability to meet power generation demand with current coal supplies and already high natural gas prices, the market has remained hypersentitive to weather forecasts for above average heat throughout the summer.

A May 12 Pew Study Revealed a few interesting insights about American knowledge and beliefs about domestic energy consumption and production. I’ll include a couple here and if you’re interested, you can find the remainder of the survey results here.

Give us a call. We can help you manage risk and navigate the current price volatility.

We’ll evaluate your current contract and explore your natural gas buying options.
Call us at 866-646-7322 for a no-cost, no-obligation analysis today.